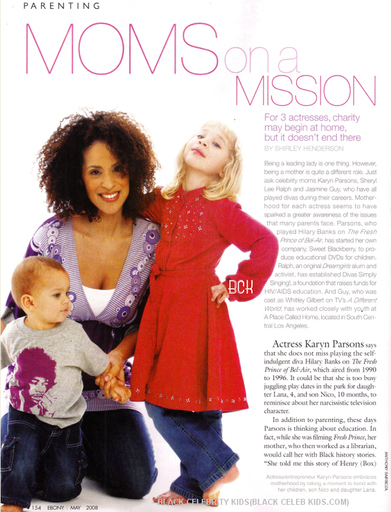 Sweet Blackberry was founded by actor/writer, Karyn Parsons (The Fresh Prince of Bel Air). As a new mom, Parsons was motivated by a strong desire to instill a sense of culture and heritage to her daughter. Inspired by her own mother and upbringing, Parsons created Sweet Blackberry—delivering to all children, stories that need to be told and heard.

We launched to critical acclaim in February 2005 with our first DVD release, The Journey of Henry ‘Box’ Brown. Narrated by Emmy award-winning actress, Alfre Woodard, The Journey of Henry ‘Box’ Brown brings to life for young children an extremely important chapter in American History, telling an extraordinary tale of human courage about a man who shipped himself, in a box, from Virginia to Philadelphia to freedom.

Sweet Blackberry’s second film, Garrett’s Gift, was narrated by award- winning actress, Queen Latifah. It tells the story of young Garrett Morgan, a creative-minded child who was finally able to focus his talents and energies and become one of the country’s most highly regarded inventors. Both of these entertaining and inspiring films have both enjoyed a long run on HBO and HBO Family, and have garnered several awards, including the Parent’s Choice Award.

Dancing in the Light: The Janet Collins Story tells the inspiring story of the first African American prima ballerina. Narrated by actor and comedian Chris Rock, Dancing in the Light teaches us that we can be anything we set our minds to, even after being told that we are not the current model for success. This story is illustrated by Coretta Scott King award-winner R. Gregory Christie, animated by Pixel Pirate Studio, and features original music by Chris Joyner.

At Sweet Blackberry, we are creating content that works across multiple media platforms, leveraging the power of stories to teach and reach young children…wherever and whoever they may be.